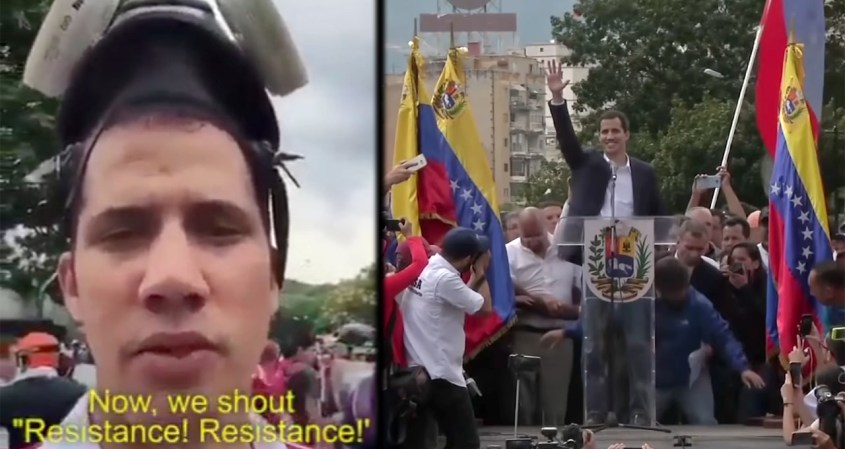 This Feb. 15 report from The Real News affirms that recognition of  Guidó’s “government” violates international law.

Admittedly, the Americans did achieve regime change in Chile, El Salvador, Argentina, Guatemala and other smaller places, though they failed notably in Cuba despite decades of furibund efforts. The case of Guatemala is fascinating. After financing, training and arming an army of thugs to wipe out tens of thousands of indigenous Guatemalans they found that their most effective weapon was old-time religion in the form of American fundamentalist Pentecostal and Evangelical missionaries. Today the latest in a series of born-again Guatemalan presidents, Jimmy Morales, seems to be cut from Trumpian cloth with a checkered history of economic, political and sexual irregularities.

So, according to the usual Washington wisdom, the government of twice-elected President Nicolas Madero–with one of those elections certified free and fair by America’s own Jimmy Carter–is on its last legs. If events follow the script he will soon be replaced, in a curious excercise of auto-appointment, by a young man who recently stepped into the Venezuelan political limelite out of nowhere. Where do these right-wing nowhere men come from, anyway?  Contrary to what the mainline media would have us believe, he did not show up by accident or coincidence.

The National Security Council’s most-recent pop-up nowhere man is Juan Guaidó and the following account of his overnight rise to notoriety is based on a long article by investigative journalists, Dan Cohen and Max Blumenthal, published on the latter’s Grayzone Project website. It’s entitled: The Making of Juan Guaidó: How the US Regime Change Laboratory Created Venezuela’s Coup Leader. (I heartily recommend reading the full article. Here’s the link.)

Here’s Where “President” Guaidó Comes From 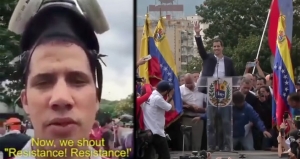 According to Cohen and Blumenthal, “Juan Guaidó is the product of a decade-long project overseen by Washington’s elite regime change trainers. While posing as a champion of democracy, he has spent years at the forefront of a violent campaign of destabilization.”

Here are just a few of the points that Blumenthal and Cohen make in their article, details that the sanitized media has not seen fit to publish: 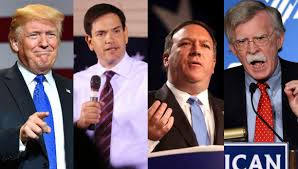 The Economic Route to Regime Change

In an article by Marjorie Cohn published in Truthout.com on February 2, 2019, she says:

From engineering coups in Chile and Guatemala, to choreographing a troop landing at the Bay of Pigs intended to establish an exile government in Cuba, to training Latin American strongmen at the School of the Americas in torture techniques to control their people, the United States has meddled, interfered, intervened and undermined the democracies it claims to protect. Now, Vice President Mike Pence, CIA Director Mike Pompeo, National Security Adviser John Bolton, Sen. Marco Rubio (R-Florida) and the infamous Elliott Abrams are working with opposition groups in Venezuela to carry out a coup d’état.

In addition to the oil sanctions, the US State Department turned over control of Venezuela’s property and bank accounts in the United States to Guaidó, in what The New York Times called “one of Washington’s most overt attempts in decades to carry out regime change in Latin America.”

According to Cohn, the former UN Special Rapporteur, Alfred-Maurice de Zayas, says the United States is waging “economic warfare” against Venezuela. In his report to the Human Rights Council, de Zayas recommends that the International Criminal Court investigate whether “economic war, embargoes, financial blockades and sanctions regimes amount to geopolitical crimes and crimes against humanity under Article 7 of the Rome Statute.”

Venezuela has the world’s largest oil reserves, and the United States, lying just 2,799  miles across the Caribbean to the north, is its biggest customer. Wouldn’t it be convenient if American petroleum interests could somehow “annex” all that Venezuelan oil by installing a “cooperative” government in its southern neighbor?

The legal and moral implications of such a move are irrelevant as far as the Trump administration is concerned. But, “somehow,” remains the question.

Go back to Part 1