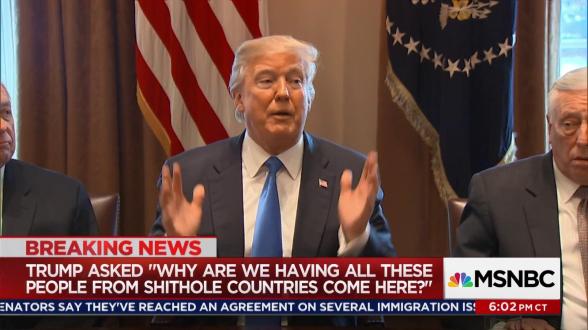 On January 11, 2018, during an Oval Office meeting with several U.S. senators about a new immigration package for immigrants from Haiti, El Salvador, and African countries, President Donald Trump inadvertanly opened a fresh controversy regarding just what constituted a “shithole country.” He didn’t elaborate on it. In fact, he later denied having said, “Why are we having all these people from shithole countries come here?” (The Atlantic, Jan. 12, 2019)

Someone should ask President Trump what his criteria are for assigning countries to his “shithole” category. They may have to explain what “criteria” means… and that it’s plural because it’s Latin… Oh, never mind.

I think it’s safe to assume that a “shithole country” is a place where people live in a deep, dank hole that they’re not about to escape from any time soon. How did a series of unfortunate little countries get into that ugly situation? Was it just assigned to them by “history?” Not exactly, it’s about imperialism–first Spanish, then American. Those little countries were fine until the white man began to exploit them. And that exploitation–some of the cruelest in history–goes a long way to explain their ending up in dark holes. President Trump mentions specifically the cases of Haiti and El Salvador.

They hacked them to pieces, slicing open their bellies with their swords as though they were so many sheep herded into a pen.

Haiti was discovered by Christopher Columbus in 1493 and named by him, “La Isla Espanola.” It was the venue for the Europeans’ first genocide of Native Americans. Because, contrary to American legend, Columbus was not a nice man and neither were his colonists. Within twenty-five years of Columbus’ arrival in Haiti, most of the island’s Taíno people had died from enslavement, massacre, or disease. En route to enslaving the entire population of the island–and exporting some of them to other islands–the Spanish regularly hunted down escaping islanders, murdered them and fed their carcasses to the dogs they had thoughtfully brought along with them from Spain. Today not a chromosome remains of  the DNA of the original inhabitants of what was to become Haiti.

Bartolomé de las Casas arrived in Hispaniola in 1502, when he was 18. For decades, he participated in the mistreatment of the Taíno and the introduction of enslaved Africans, before renouncing it all, becoming a Dominican friar and confessing what he had witnessed in “A Short Account of the Destruction of the Indies.”

“It is worth quoting him at length,” says Brockell, “this excerpt is very graphic:”

They [Spanish explorers] forced their way into native settlements, slaughtering everyone they found there, including small children, old men, pregnant women, and even women who had just given birth. They hacked them to pieces, slicing open their bellies with their swords as though they were so many sheep herded into a pen. They grabbed suckling infants by the feet and, ripping them from their mothers’ breasts, dashed them headlong against the rocks. (The Washington Post, Oct. 14, 2019)

Flash forward 500 years, and the Haitians are again experiencing problems of white supremacy. In 2004 the US State Department was not happy with Haiti’s newly elected–for the second time–president, Jean-Bertrand Aristide. So they shipped him out–escorted by American diplomats to an American airplane–in a coup d’etat that cleared the atmosphere for American business as usual.

More than 75,000 Salvadorans were killed in the fighting, most of them victims of the military and its death squads.

El Salvador is another classic case of brutal imperialism, and its perpetrators are still slithering around Washington. The prime example is the elderly neocon apparatchik, Elliott Abrams, recently recycled as the American envoy to Venezuela.  Abrams will always be remembered for trying to cover up before the American Congress the El Mozote massacre where, in March 1993, the Salvadoran Truth Commission reported that more than 500 civilians were “deliberately and systematically” executed in that village in December 1981 by forces affiliated with the Salvadoran government.

Abrams, a longstanding neoconservative diplomat, served in the State Department during the Reagan Administration and played a key role in U.S. interventions in El Salvador, Nicaragua and Guatemala in the 1980s. He later joined the New York-based think tank, the Council on Foreign Relations, as a senior fellow. His appointment to oversee the U.S.’s response to the situation in Venezuela, where Trump has refused to rule out “a military option,” led many to raise concerns over his past dealings in the region, including his entanglement in the notorious Iran-Contra scandal. (Time, Feb. 14, 2019)

In the early 1980s the American clandestine services joined the illegitimate Salvadoran military junta in its struggle against the Farabundo Martí National Liberation front (FMLN)–a coalition of left-wing groups. The Americans financed, trained, equipped and transported the government troops.

It was a civil war of the 1980s, one that pitted leftist revolutionaries against the alliance of countries, oligarchs, and generals that had ruled the country for decades—with U.S. support—keeping peasants illiterate and impoverished. It was a bloody, brutal, and dirty war. More than 75,000 Salvadorans were killed in the fighting, most of them victims of the military and its death squads. Peasants were shot en masse, often while trying to flee. Student and union leaders had their thumbs tied behind their backs before being shot in the head, their bodies left on roadsides as a warning to others.

This gratuitous “civil war” lasted for more than 12 years. An unknown number of people who were “disappeared” are included in the UN estimates of 75,000 victims between 1979 and 1992. The war ended with the Chapultepec Peace Accords, but in 2016 the El Salvador Supreme Court ruled that the 1993 amnesty law was unconstitutional and that the El Salvador government could prosecute war criminals. (Wikipedia)

Trump’s Dangerous Militarization of US Politics by Ishaan Tharoor

The world’s sole superpower is starting to look like more fragile countries elsewhere. Trump and his loyalists are only the second camp in the Western Hemisphere this past month to entertain notions of domestic military crackdowns: Supporters of Brazilian President Jair Bolsonaro have urged a full-fledged takeover of the administrative state as the president faces a storm of controversies amid the coronavirus pandemic.

Tharoor compares American racist horrror with the events of Tiannanmen Square in 1989. “Only under a dictatorship could such things happen, we say, forgetting Ocoee, Opelousas, Tulsa, or Kent State.”

The bottom line is that the twisted conception of Latin American–and American–history held by American presidents since the promulgation of the Monroe Doctrine in 1823 is a series of “errors” and abuses that need clearing up. There may be a “shithole country” involved in the tragic stories cited by President Trump, but it’s neither Haiti nor El Salvador. Their roles were relegated, throughout their history, to those of simple victims of colonial savagery .

Trevor Noah sums it up in one minute, seven seconds: