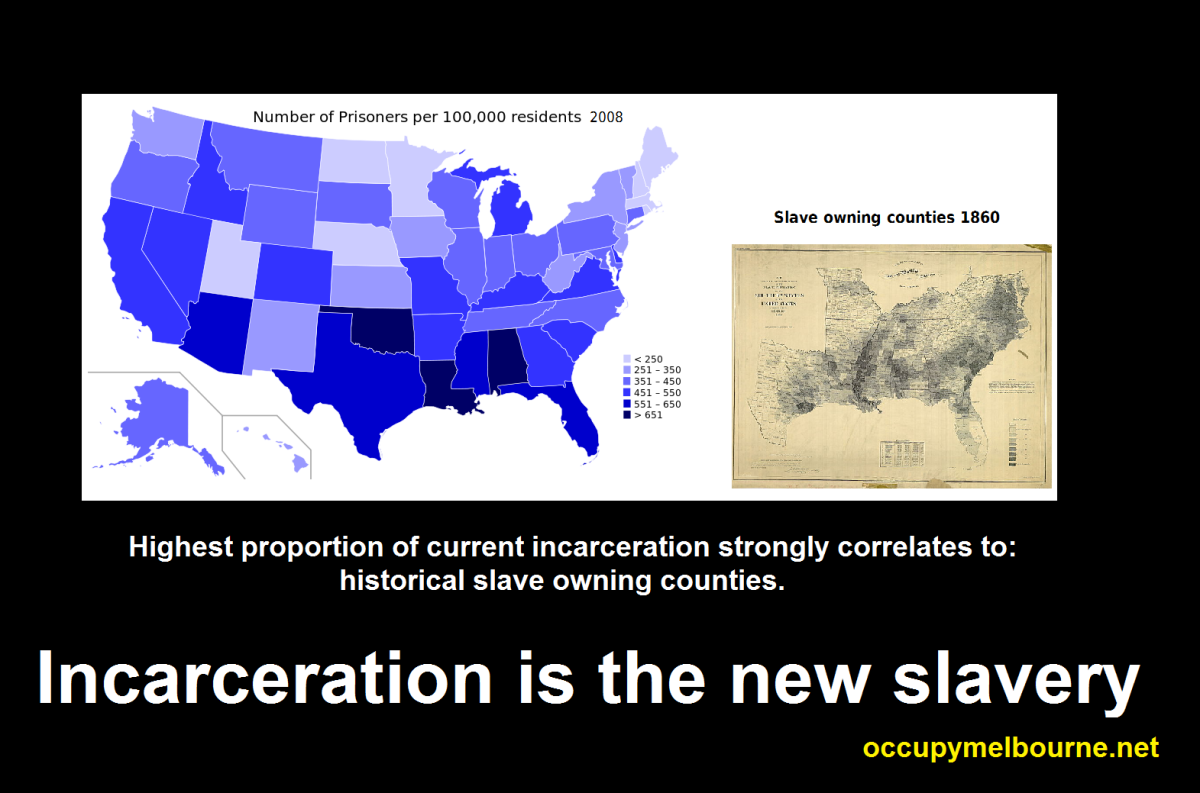 A 2014 study by a doctoral candidate at UC Berkeley shows that minorities make up a greater percentage of inmates in private prisons than in their public counterparts, largely because minorities are cheaper to incarcerate. (It doesn’t say why. Are they more docile?) According to the study, for-profit prison operators accumulate these low-cost inmates “through explicit and implicit exemptions written into contracts between these private prison management companies and state departments of correction.”

An example of private prisons’ inadequate staff training leading to jail violence was reported by two Bloomberg News journalists, Margaret Newkirk and William Selway in Mississippi at the now-closed Walnut Grove Correctional Facility (WGCF). According to the journalists, the ratio of staff to prisoners in this prison was at times as low as 1 to 120. In a bloody riot in this prison, six inmates were rushed to the hospital, including one with permanent brain damage. During the riot, the staff of the prison did not respond but waited until the melee ended, because prisoners outnumbered staff at the time by a ratio of 60-1.

Why Does the United States Have Millions of Prisoners?

Why do so many Americans deserve prison? Are they genetically determined for crime and mayhem? Is it something in the water? Are they just the worst people on earth? I’m reluctant to believe that. Something is causing them to be the way they are and preventing them from being honest productive citizens instead of misfits and social pariahs.

Could it have to do with being born and raised in a dystopian (as opposed to utopian) society? The United States is, after all, number one in the world in school shootings (and all firearms deaths, for that matter). It worships get-rich-quick entrepreneurs, speculators and deal makers, people who would rather grab than create.  (And what faster way to get rich quick than dope peddling?) Some of its citizens actually feel threatened by collective solutions whether it be environmental protection or universal health care–or even public schools–solutions that have immensely elevated people’s wellbeing all over the rest of the known world.

The United States is the world leader in home repossessions, in homelessness and people who live–and try to raise their families–in their cars. It’s a country run by an unenlightened conservative majority that prefers castigation to education, self-interest to solidarity. It’s every man for himself. It’s no wonder it gets lonely out there. People get desperate and inevitably get into trouble. And, thanks to mandatory sentences and other inhuman judicial and business practices many of them find themselves incarcerated for a long time, if not forever. Especially if they’re black.

The “natural” habitat of young American black men–the majority of the inmates in all U.S. penal institutions–is mean streets, inequality, penury, unfairness, violence and hopelessness. Could it be any other way? If the current President of the United States is a sociopath, how are the impoverished, uncultured black kids in the neighborhoods supposed to be models of sanity and civility?

It’a not clear how many Americans are aware of the extent to which President Obama was disrespected and boycotted by the Washington good ol’ boys for the mere fact of being black, but from this side of the Atlantic the disdain looked blatantly evident. Considering the treatment accorded the President of the United States, one can only imagine that  dispensed to young black drug offenders in the prison system, whether public or private.

Jill Filopivic Writes in The Guardian

I’d like to cite here a couple of paragraphs from Jill Filopivic writing for The Guardian, examples of how the American private-prison situation is seen by many people in the rest of the world.

“The privatization of traditional government functions – and big government payments to private contractors – isn’t limited to international intelligence operations like the National Security Agency. It’s happening with little oversight in dozens of areas once the province of government, from schools to airports to the military. The shifting of government responsibilities to private actors isn’t without consequence, as privatization often comes with a lack of oversight and a series of abuses. One particularly stunning example is the American prison system, the realities of which should be a national disgrace.

Some of those realities are highlighted in a recent lawsuit filed by the American Civil Liberties Union (ACLU) on behalf of prisoners at the East Mississippi Correctional Facility (EMCF). The ACLU contends the facility, which is operated by private contractors, is rife with horrific abuses.

The complaint lists a litany of such horrors: rampant rapes and placing prisoners in solitary confinement for weeks, months or even years at a time, where the only way to get a guard’s attention in an emergency is to set a fire. Rat infestations are so bad that vermin crawl over prisoners; sometimes, the rats are captured, put on leashes and sold as pets to the most severely mentally ill inmates.

There are many suicide attempts, some successful. The untreated mentally ill throw feces, scream, start fires, electrocute themselves and self-mutilate. The prison authorities deny or delay treatment for infections and even cancer. Stabbings, beatings and other acts of violence are common. Juveniles are housed with adults, including one 16-year-old who was sexually assaulted by his adult cell mate. Malnourishment and chronic hunger abound. Officers deal with prisoners by using physical violence…”

So don’t think that nobody’s looking.

Is There a Solution?

If there is a way out, it’s not in plain view. Because in order to solve the prison problem you have to start by solving everything else, as all of the United States’s critical issues are interrelated: health, education, militarization, white supremacy, social programs, corruption in business and government (including legal corruption like gerrymandering and hard-cash lobbying, that legislators have legalized in order to write their own tickets), unregulated killer capitalism, guns uncontrolled, inequality on all fronts… That is to say, virtually all of the sick values that underlie a terminally ill society.

Just imagine yourself sitting on the tip of a massive iceberg with a paddle, paddling like crazy trying to turn it around 180 degrees. Are you optimistic? Neither am I.

Read more rants in my ebook, The Turncoat Chronicles.