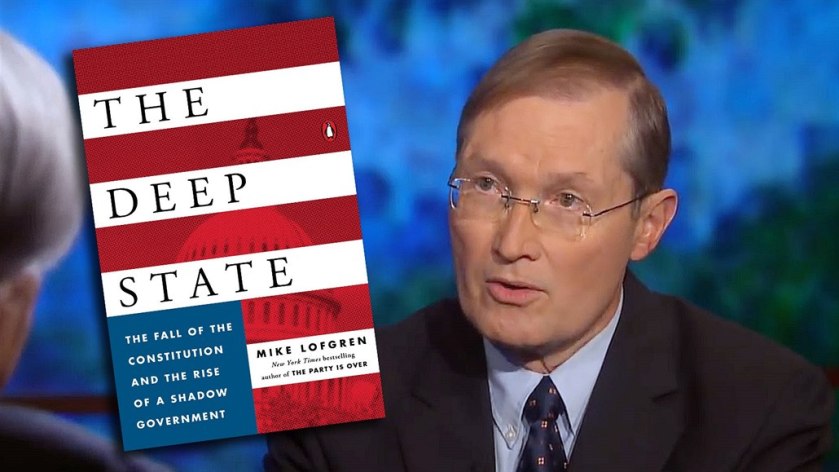 Note: This article is mainly based on a 2014 interview with Bill Moyers (The Deep State Hiding in Plain Sight) on his Moyers and Company online program and the essay (Anatomy of the Deep State) that Mike Lofgren wrote for Moyers’ website at the same time. Also worthy of note is the mindset of Moyers, the interviewer. When he retired the first time in December 2004, the AP News Service quoted Moyers as saying, “I’m going out telling the story that I think is the biggest story of our time: how the right-wing media has become a partisan propaganda arm of the Republican National Committee. We have an ideological press that’s interested in the election of Republicans, and a mainstream press that’s interested in the bottom line. Therefore, we don’t have a vigilant, independent press whose interest is the American people.”

In the Beginning Was Mike Lofgren

Mike Lofgren has the benign face and mild demeanor of a high-school Latin teacher, but his message is anything but mild. Instead of prying Latin declensions into the heads of reluctant sixteen year olds, Lofgren spent his 28-year working life as a Republican Congressional staffer. So he has a privileged take on what goes on inside Congress, particularly the Republican Party. And he’s smart. Lofgren’s books and articles since retirement make clear that he is not cowed by people in high places. Just the title of his first  book (2013) gives us a hint: The Party Is Over: How Republicans Went Crazy, Democrats Became Useless and the Middle Class Got Shafted. The Washington Post characterized the book as “forceful, hard-hitting and seductive.” Lofgren said at the time, “I wrote the book because I am a concerned citizen.”

If you read the papers, both mainstream and alternative, though you may have long suspected something along the lines of the Deep State thesis, you could never substantiate it. This interview and Lofgren’s books will permit you do do just that. Even before his books he limbered up with a series of telling essays on Truthout.com. The first one, in September, 2011, was Goodbye to All That: Reflections of a GOP Operative Who Left the Cult. In it he explains why he retired, affirming that he was “appalled at the headlong rush of Republicans to embrace policies that are deeply damaging to this country’s future; and contemptuous of the feckless, craven incompetence of Democrats in their half-hearted attempts to stop them.” Mike Lofgren first used the term “Deep State” in his Goodby to All That essay, referring to a “web of entrenched interests in the US government and beyond (most notably Wall Street and Silicon Valley, which controls access to our every click and swipe) that dictate America’s defense decisions, trade policies and priorities with little regard for the actual interests or desires of the American people.”

He charged there that both major American political parties are “rotten captives to corporate loot,” but that while Democrats are merely weak and out of touch, the Republican Party “is becoming more like an apocalyptic cult.” That was in 2011, nine years ago. In the meantime his “…is becoming…” has evolved. It now would read “has become a fully-fledged apocalyptic cult.” Lofgren describes highly-placed Republicans as caring only about their rich donors; being predisposed toward war; and pandering to the anti-intellectual, science-hostile, religious fundamentalist fringe.

This essay published on BillMoyers.com is so cogent, so knowledgeable and so impervious to the passage of time, that it is still required reading. As usual, I printed it out and started highlighting the most salient paragraphs with a green felt-tipped marker. When I was finished I found page after page of solid green. Want to try it yourself? Here’s the link.

With Lofgren’s second book, The Deep State: The Fall of the Constitution and the Rise of a Shadow Government (2016), he takes us even deeper into the Potomac swamp which, he affirms, now extends from New York to California. An observant reviewer on Amazon.com puts his finger on one of Lofgren’s most important revelations regarding the Deep State:

The whole point of the Deep State is that it is NON PARTISAN. It transcends democrats and republicans and you simply have to follow the money. Anyone who thinks that Donald Trump is not part of this – after appointing a cabinet of billionaires and generals, de-regulating Wall Street even further, and driving up the military budget while threatening to curtail what little social services we have left, have clearly drunk the Kool-Aid. You don’t get to be President unless you have the tacit support of the Deep State.

“There is the visible government situated around the Mall in Washington, and then there is another, more shadowy, more indefinable government that is not explained in Civics 101 or observable to tourists at the White House or the Capitol… Yes, there is another government concealed behind the one that is visible at either end of Pennsylvania Avenue, a hybrid entity of public and private institutions ruling the country according to consistent patterns in season and out, connected to, but only intermittently controlled by, the visible state whose leaders we choose.”

Everything that President Trump says or writes, awakens the same questions: Is he confused or is he trying to confuse me? Or both? The subject of the Deep State is no exception. He frequently sees it–and uses it–as a whipping boy but sometimes, usually when he’s in trouble, he turns to it as an ally. Here’s Business Insider (on the subject:

Rather than referring to a “shadow or parallel system of government” operating outside official channels, for Trump the deep state is the government —
or at least those parts of it that frustrate him in any way.

Some people withhold that the Deep State is just a fantasy of conspiracy theorists. Who believes that? Like everything else in politics what people believe depends upon what they are presupposed–or paid–to believe. If you google Mike Lofgren’s books and essays and look at the readers’ reviews, you’ll find that the big half of them award him four or five stars and the rest, just one.  My guess is that most of those one-star readers are Republicans who haven’t actually read the book but are embittered by the fact that he let their cat out of the bag.

This video might seem out of place here, but look again.  This, I submit, is the exact opposite of the President that the US currently enjoys, and the quintessence of what non-Trumpish Americans are seeking today for the leadership of their country.

Thanks for following, commenting and sharing