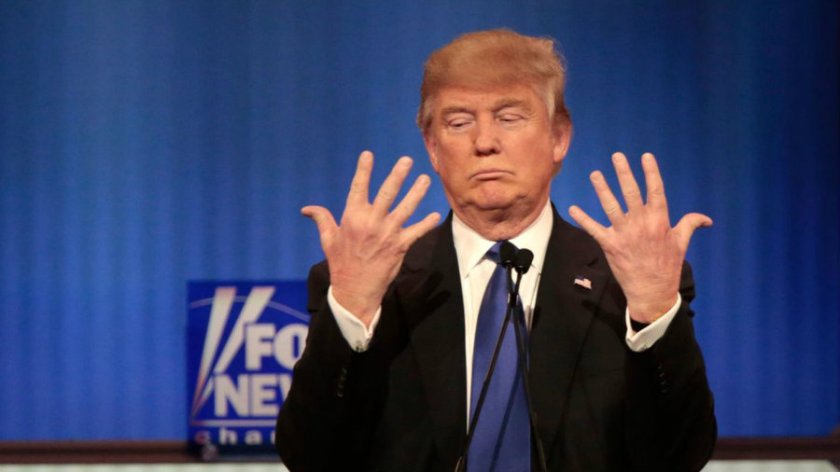 My friend Danny writes from Greece the other day, “Why do you waste your time on Donald Trump? He’s just a moron.”

Yes, I suspect he’s a moron but I’m not sure that time spent on him is wasted. I don’t regard him so much for himself as for what he represents–the United States of America, with all that implies. Not so long ago, just the mention of that hallowed name would elicit respect verging on reverence. The United States had tipped the balance toward victory in both world wars and had gone on to set the benchmarks for science, technology, education, and democracy. Today, tragically, “the United States of America,” has lost most of its gloss. It sounds almost as ironic as “Great Britain.” If anything characterizes both of these once-great nations today, it’s the velocity of their race to the bottom.

There’s also a matter of reality vs. mythology. The “English gentleman” was never a  gentleman, and he’s even farther from that ideal today. Boris Johnson, for example, has all the right credentials. The so-called English gentleman was responsible for enslaving and plundering the sovereign wealth of millions of people around the world in order to dot the Home Counties with those gracious palatial mansions, if anything gained by thuggery can be deemed “gracious.” The British Empire, established by England between the late 16th and early 18th centuries, originated with overseas possessions and trading posts. At its height, it was the largest empire in history and, for more than a century, the foremost global power. By 1913, the British Empire illegally and immorally held sway over 412 million people, 23% of the world population at the time, and by 1920, it covered 35,500,000 km2 (13,700,000 sq mi), almost a quarter of the Earth’s total land area. (Numbers from: Wikipedia)

US History Is Equally Grim

As for the United States, it was founded largely on genocide, cynicism, and lies. With their mouths full of “democracy,” their fists were full of native lands and natural resources, their hearts full of greed. Between 1830 and 1850 members of the Cherokee, Muscogee, Seminole, Chickasaw, and Choctaw nations were forced by President Andrew Jackson to traverse the Trail of Tears to the badlands on the other side of the Mississippi, renamed the “Indian Territories.” In the process, these Native Americans, who had acceded to US government demands to abandon their traditional way of life in favor of agriculture and commerce, were obliged to forfeit their farms and businesses in the Southeast. Even that atrocity was not enough. Later the Indian Territories were grabbed for white exploitation.

With the same ruthless expedience, dubbed Manifest Destiny, and overlapping with the Trail of Tears on the timeline, the Americans extended their southern border down to the Río Grande. It was in 1848 after the Mexican-American War–actually an out-and-out American land grab–when, in accordance with the Treaty of Guadalupe Hidalgo, Mexico “ceded” to the United States more than a third of its territory (the current American states of California, Nevada, and Utah, along with portions of Arizona, New Mexico, Colorado, and Wyoming. Considering these seizures, as well as all of Texas, Mexico lost 54% of its pre-1836 territory in the harmless-sounding “Mexican Cession.” What the 11th-grade American-history books don’t tell you is that, while the Treaty of Guadalupe Hidalgo was being negotiated, US General Winfield Scott’s troops were occupying the Mexican Capital.

The Wanton Dismantling of America Is Not Even Illegal

These smash-and-grab policies extend down to our own day. The motives are the same and so is the American modus operandi. I’ll spare you the list of victims. You read the papers. Ironically, it’s not the rest of the world that receives the principal brunt of Donald Trumpism. It’s his own countrymen and women. President Trump, anointed by his country’s big-money interests is delegated to impose their retrograde ideology, which can be summed up as “dismantle the American government so business can take over.” He and his ghoulish cohorts are progressing apace, and it’s not even illegal.

Donald Trump didn’t become President just by accident or Russian intervention. Thanks to the confluence of an ignorant electorate that had been betrayed by generations of American politicians and the economic clout of big business, Donald Trump was well and truly elected. He enjoyed the backing at the polls of major segments of the US voting population, including not just semi-literate hillbillies and white supremacist thugs–though there were plenty of them. His voters also included cast-offs from America’s once-great industrial workforce as well as former solidly-middle-class citizens reduced to working McJobs and wondering how they’re going to send their kids to college. The former, after decades of America-the-Beautiful and Support-Our-Troops brainwashing, lacked all political criteria, and the latter were striking back at the system for betraying and impoverishing them. (Author’s note: Yes, America is undeniably beautiful, but so is almost every other country, something most Americans don’t realize. As for the troops, they definitely need supporting but the best way to do that is to bring them home, not send them into another hell hole.)

U.S. manufacturing jobs have declined steadily, from around 28% in 1960 to 8% in March 2017. Manufacturing employment has fallen from 17.2 million persons in December 2000 to 12.4 million in March 2017, a decline of about 5.7 million or about one-third. (Source: Wikipedia) This is what the American working class is up against, watching the jobs-and-benefits capital of the world become the Rust Belt. An article published by the Federal Reserve Bank of Minneapolis (minneapolisfed.org) has this to say on the subject:

The fall of the Rust Belt extends back to the 1950s when firms such as General Motors and U.S. Steel dominated their industries and were among the biggest, most profitable businesses in the world. The Rust Belt was an economic giant at that time, accounting for more than half of all U.S. manufacturing jobs in 1950 and about 43 percent of all U.S. jobs. But after 1950, the Rust Belt began a long downturn.

Moreover, the fact that its share of U.S. manufacturing jobs fell so much demonstrates that the Rust Belt’s fate was not simply part of the general decline in U.S. manufacturing. The Belt’s downturn was uniquely deep and long-lived. Indeed, since 1950, no region of the United States fared worse economically than the Rust Belt.

When we refer to “big- money interests” we’re talking about the great energy companies, of course, but also banks, hedge funds and insurance companies, big pharma and tobacco, and the military/industrial complex, each with its own destructive agenda. And let’s not forget America’s deranged billionaires, who are striding out across the country–and the globe–like exquisitely-coifed Godzillas (e.g. Robert Mercer whose SCL Group provided financing and essential technical support to the Brexit campaign in the UK, or the Koch Brothers‘ self-interested meddling in Venezuela.) Against such formidable enemies–Yes, enemies. We’re talking about an adversarial system here.–“We the people,” don’t stand a chance.

How is it possible that such malfeasance on the part of the American government was actually legal? The principal factor in the process had to do with fixing elections through new campaign financing regulations. This was the result of the US Supreme Court’s decision in the Citizens United v. Federal Election Commission, 558 U.S. 310 (2010), which opened the doors for corporations to spend money on electioneering communications and to directly advocate for the election or defeat of candidates. This decision breathed new life into an already vigorous lobbying business in Washington. It was the task of the lobbyists to channel corporate money into the election coffers of “sympathetic” politicians. As it turned out, there was no shortage of candidates whose sympathy could be purchased, and lobbyists were soon calling the tune in the nation’s capital. Though it wasn’t their own tune they were calling, rather that of their “sponsors.” That serve-the-sponsors procedure soon passed down to practically all the members of the House and Senate and goes a long way towards explaining the mediocrity and unscrupulousness on both sides of the aisle in Congress. Are there exceptions to this phenomenon? Yes, but far too few.

It is not an exaggeration to affirm that an American member of Congress’s first priority is neither the wellbeing of their constituents nor the security of their country. It’s purely and simply to get elected–or more frequently re-elected. The magic bullet for getting elected is money. To what extremes will Congressional candidates will go to grasp that money? They will go far. They will give a virtual blank check to oil and coal interests to despoil the earth, the water, and the air. They will savage the country’s budget in order to entitle the military/industrial/congressional complex to wage perpetual war, though they know that war does not make America safer, rather more insecure. Perhaps gravest of all, the power of moneyed interests to dictate policy for their own nefarious ends negates utterly any notion of ethics or humanity in government. They are prepared to see the whole country reduced to the condition of Flint, Michigan. (The latest news from Flint, September 9, 2019: Amid Water Crisis, Michigan’s Top Health Official Said Flint Residents “Have to Die of Something,” Scientists Say)

Decency and Hope, Plowed Under

If an ounce of decency remained after the Nixon, Reagan, Clinton, Bush, Obama, and Trump presidencies, it has long since been plowed under, and the whole world is aware of that fact. All world leaders, with the possible exception of the poor, shipwrecked Brits, distrust the United States explicitly. That condition of alone and distrusted is not an enviable position, friends. Ah, but they have many friends and allies around the world, you say. Not exactly. Those “friends” are mainly purchased or coerced and the “allies” are either bribed with cold cash and armaments or cajoled with promises and threats. What does the United States have to do to turn an independent country into an ally? It’s not necessary to “win the hearts and minds” of the whole citizenry. Usually, it’s enough just to bend the wills of a few high officials. How many of these well-placed running dogs does it take to deliver a country into the hands of the US? Not that many, actually. Usually, it’s a bargain. In the final analysis, the common interests the United States shares with their ill-gained “allies” are the uncertain promises of profit and plunder.

Who’s at the head of all these sinister shenanigans at home and abroad? President Donald J. Trump. If you’re going to try to stop him you had better start now.