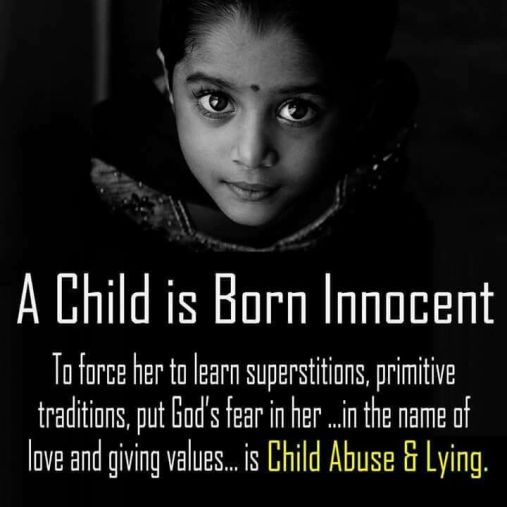 Lying to children has been a universal phenomenon since time immemorial. Parents, consciously or unconsciously, raise their offspring dishonestly, perpetuating the same lies they were told by their own parents. Children are innocent blank slates. Anything imprinted on them during infancy is virtually indelible. If you teach your children that a fat bearded man in a red suit and a funny hat flies around the globe in a reindeer-drawn sleigh and  slips down chimneys to deliver gifts to all the children in the world, you’re planting the seed of a venemous creeping vine. Any child who will believe that preposterous story because a trusted loved one told it, will grow up to believe that a Jewish carpenter’s son who died 2,000 years ago will raise that child into heaven.

Lies have been and remain fundamental pieces in the strategy of all repressive regimes, whether political or religious, at all times. Power hungry rulers around the world need to form—and deform—their populaces as virtual masses of livestock that serve mainly to be herded and milked–and bled–and the best place to start is with children.

Where Are You From? That Explains It

We are who we are because of where we come from. You can’t blame an Indian for being Hindu. His mother’s milk was Hindu along with all the rest of the world in which he grew up. Nor can you blame an American from the bible belt for being a Christian. Or a New Yorker for loving asphalt and having trouble understanding Texans. Or Texans for being Texans.

What I would like to blame young Americans for here is taking on bovinely all that self-aggrandizing nationalistic and religious claptrap that their country’s con men thrive on. But, in all fairness, I’m not sure I can do that either. American young people are just as conditioned from birth as the Hindus, though they may not realize it. And those who get rich are convinced they’re another of those fraudulent American inventions, the “self-made (wo)man.”

To children—and their parents who were raised on the same kibble—the early lies seem innocuous, even charming: Santa Claus, the baby Jesus, the tooth fairy… But this soon becomes seriously sinister. It opens the floodgates to all the rest: racism, patriotism, entitlement, militarism… Since virtually everybody in that sponge child’s universe is on the same wavelength, he’s trapped in an ideological dead end. In the case of the United States that explains the fearful homogenization of thought in which there’s no room for anything but hard-core Americanism and old-time religion. There’s no room for solidarity with people who are different, no empathy, no mercy for children with the ill luck to be born outside the boundaries of the 50 states, and very little for those inside. “We’re all white, Christian, free-market believers in American-style democracy,  and those who ain’t is in deep trouble.”

Does this sound familiar?

Even though all the world’s great religions have been twisted to fit the sick agendas of priests, generals, emperors and dictators, they still expect us to revere them. Have you taken a look at the 10 commandments lately? How many of them are observed religiously by any modern government today? Don’t make me laugh trying to figure that one out. Does the Koran sanction suicide bombings and the wholesale slaughter of innocents? Or the extreme repression of women, for that matter? Does the Bible sanction the precision bombing of civilians, or the capricious invasion of soverign nations? No they don’t.  But never mind, all religions have their inconvenient technicalities, but they can be ignored in special cases.

How Do You Create a Killer?

How do you get a healthy, well-educated young person to strap an explosive vest on his body and detonate it in the midst of a crowd of innocent bus passengers? It’s not complicated. You appeal to his sense of patriotism, righteousness and the promise of eternal life. That’s the best bait, eternal life. Nobody who promises it knows how to deliver it but there are lots of ingenuous marks who don’t seem to mind.

By the same token, how do you get a bright young computer-games whizbang to sit in an underground bunker in the desert and kill remotely at distances of thousands of miles not only his country’s presumed enemies, who are unknown to him, but everyone else on the bus or at the wedding. The bride and groom, the best man and the maid of honor, the altar boys, parents and grandparents…

That’s not too complicated, either.  You just double his pay and tell him he’s a patriot. That—patriotism—is the great killer, not only of “the enemy’s” young people but of your own. What is more heroic, nay glamorous, than dying for your country? Would someone please explain to me exactly what that means: “dying for one’s country.” Who benefits from the death of an American soldier abroad these days? His parents, his friends, his wife and children? Yes, I’m being ridiculous. Who benefits are arms manufacturers and dealers, bankers, politicians, media magnates, speculators, right-wing radio talk-show geniuses… all patriots, to be sure. I find this game cheap and nasty, absolutely abhorrent. Why can’t American mothers and fathers, sisters and brothers understand that? It’s beyond me. As for the old “Support our troops” trope, it’s patently sick and sordid, another massive lie that still prevails. The best way to support the troops is to bring them home.

The Road to Hell Is Paved with False Promises

As far as I can see 100% of the wars the US engages in are motivated by crass short-term self interest, to export arms, not democracy, to humiliate the weak, to twist their minds and grab their resources. That’s government policy, not coincidence. We must never forget that in all first-world countries it’s the citizens (us!) who elect the decision makers and pay their bills. If this doesn’t constitute a sacred trust on their part—and ours–I don’t know what does. Yet, as you know, seldom is this trust honored by politicians who, once elected, dedicate themselves heart and soul to feathering their own nests and those of their corporate “sponsors.” Do you doubt it? OK then, name two or three rigorously scrupulous politicians of your own. Having trouble? You’re not alone.

There May Be an Escape Route

There is one possible escape route through which perhaps 1% of children could obviate the inevitability of inherited brain death. It is, of course, education. Little people who are taught to think for themselves from an early age, to question everything, to leave no basic belief unverified in the light of science and simple common sense, just might have a chance of escaping the inevitable. But those fortunate children better hurry, because the few remaining teachers who are prepared to teach those values are fast disappearing. And there aren’t many more like them in the pipeline, not when the very Secretary of Education of the United States is a self-proclaimed proponent of privatized religious education.

Is it already too late? Probably.

Read more rants in my ebook, The Turncoat Chronicles.