It’s a Conspiracy Theory; Over and Out

We see the term used frequently in discussions of hotwire subjects like the Kennedy assassination, 9/11, extraterrestrials or weapons of mass destruction. It’s almost as if it were invented–or adopted–as a tool for shutting down debate on controversial or inconvenient subjects. Inconvenient for whom? That’s the interesting point. The offended parties tend to be the government, the intelligence services, big business or other powerful–and sometimes shady–institutions, entities that logically demand citizen monitoring in a democracy. If the “conspiracy theory” didn’t exist they would have had to invent it. As it happened, it was already lying around. All they had to do was shine it up and appropriate it for their own use.

Do You Believe Everything You Hear?

But are all the conspiracy theories necessarily false? Is it utterly out of the question that the American clandestine services, for example, might want to hoodwink the citizens on certain subjects? Because, if that is a possibility, we certainly can’t discard out of hand all the conspiracy theories. But which ones do we consider feasible and look into further, and which ones do we reject? This requires a little research, some thought and decision making in our own minds. A fundamental factor here is that you must decide for yourself. Warning: there’s the danger that we may encounter some serious threats to our cherished beliefs along the way. There may not be a Santa Claus and Osama bin Laden might have had nothing to do with 9/11. He might have applauded when he saw it, but did he launch it? The answer to this thorny question is out there but it will take some digging to find. This means work and that’s one reason why many citizens prefer to accept ready to wear opinions from others such as the government or the mainstream media, or usually both. Accepting conventional wisdom is easier but it entails the danger of being led down a toxic garden path.

America Is the Land of Pre-fab

The United States is the land of pre-fab, which extends to ideas. Americans don’t have to think for themselves if they don’t want to, or know how. There are lots of people and institutions–Boy Scouts, churches, schools, political parties, PR firms, lunatic-fringe organizations–who will do their thinking for them and present it to them pre-cooked and gift wrapped. But it’s always the system’s thinking, not theirs. And most of those canned opinions are based on hidden agendas, cloaked interests and grotesque values. One of the great unacknowledged luxuries of our time is the ability to discern lies, hypocrisy, opportunism, theft and war mongering for ourselves. It just requires doing some homework.

What happens to citizens who don’t bother. They just drink the poisonous Kool-Aid and continue to wallow in the ideological murk. By the time American citizens are young adults they’re well tempered and on the rails. They see only what they want to see. They hear what they want to hear. They believe what they want to believe. No amount of de-programming, however reasonable, will un-convince them. Over time and through incessant repetition of facile “truths” their ideas are case hardened in the crucible of magical beliefs and shoddy values, those of patriotism, religion and American exceptionalism.

This is the situation in the United States today. It is this brainwashed citizenry that permitted Donald Trump and his nefarious team to take over the country and implement their wrecking-ball agenda, a project that was based on traditional American Kool-Aid values. (Don’t ever be tempted to think that the problem is the President and the answer is to get rid of Trump. That would be just the first tiny step, perhaps the easiest one.)  Where did American values come from in the first place? Everybody knows the answer to that 11th-grade American-history-class question. They came from the Puritans fleeing from religious persecution in England. They came from the illustrious framers of the Declaration of Independence and the United States Constitution. They came from rugged frontiersmen and ambitious industrialists. They came from a proud military tradition. Those homespun values are what the Kool-Aid is concocted from.

There is another version of the roots of American traditions, however, and you can find it in an eye-opening 1995 book by James W. Loewen called The Lies My Teacher Told Me. Loewen maintains in his lavishly footnoted book that the authorized American high-school history textbooks are based more on patriotic myths than actual historical events, beginning with Christopher Columbus himself.  Fray Luis de las Casas and other first-hand witnesses of Columbus’s exploits on the island of Hispaniola emphasize his genocidal rapine. The three Columbus expeditions virtually wiped out the native Arawak/Taino tribe there. An academic paper published by Bob Corbett on the Webster University site has this to say about the fast-dwindling native population:

One long technical article on the population (of Arawak/Tainos) comes in the with the low population estimate of 100,000. Several other modern scholars seem to lean more forcefully in the area of 300,000 to 400,000. Whatever the number, what happened to them is extremely tragic. They were not immune to European diseases, especially smallpox, and the Spanish worked them unmercifully in the mines and fields. By 1507 the Spanish were settled and able to do a more reliable job of counting the population. It is generally agreed that by 1507 their numbers had shrunk to 60,000. By 1531 the number was down to 600. Today there are no easily discerned traces of the Arawak/Taino at all except for some of the archaeological remains that have been found.

While we’re on the subject of books, you might have a look at Jill Lepore’s recently published These Truths, which includes this revelation:

Between 1500 and 1800, roughly two and a half million Europeans moved to the Americas; they carried 12 million Africans there by force; and as many as 50 million Native Americans died, chiefly of disease…

The Truth Is Evaporating Before Our Eyes

Former Reagan administration Treasury Sub Secretary, economist and Wall Street Journal Columnist, Paul Craig Roberts, recently published on his column an article entitled “Truth Is Evaporating Before Our Eyes.” He calls attention to what he calls “evidence-free accusations established as absolute facts.” That “evidence-free” trend also applies to the mainstream’s refutation of so-called “conspiracy theories.” Insofar as evidence and argument are irrelevant in their world, they don’t feel required to resort to reasoning. They can get by simply by attaching belittling labels to uncomfortable explanations for extravagant events, then affirming and re-affirming them. Roberts says, “The result is that today truth is established not by evidence but by repetition of accusations and falsehoods.” Further down in the same article he adds,

What I have described is a truth-free world. The Western hostility to truth is overwhelming. As I write truth-tellers are being banned from Facebook, Twitter and PayPal. Google makes their sites almost impossible to find. Throughout the Western World truth has been redefined as “Conspiracy Theory.”

A universal truth in human discourse is that no one wants to hear the truth.

A Case in Point

Let’s take a brief critical look at an actual event that has been relegated to “conspiracy theory” for the past 17 years by all right-thinking Americans: the September 11, 2001 attacks on the World Trade Center and the Pentagon. We’re all familiar with the official version: a Saudi Muslim terrorist hooked to a kidney machine in a cave in Afghanistan organized and executed four virtually-simultaneous suicidal airliner attacks on America’s capital and its largest city, three of which were on target. As 15 of the 19 hijackers were Saudi Arabian citizens, the George W. Bush administration immediately locked down American aviation with the exception of the plane that scuttled around the country picking up Saudi citizens and cosseting them home to Riad. Then, naturally, the United States invaded Iraq and Afghanistan.

Shortly after these mournful events articles began appearing, mainly on the Web–as what these people had to say was not welcome in the mainline media–with the notable exception of valiant articles published by Robert Fisk (in The Independent) and Susan Sontag (in The New Yorker), trying to elucidate the “why” of the September 11 attacks. Most of these online articles questioned the very possibility of pulverizing state-of-the-art American skyscrapers with one airliner impact each and the subsequent fires, a feat that has never been achieved before in any other skyscraper anywhere in the world. Many architects and engineers pointed out that such an outcome was contrary to the laws of physics and therefore impossible. Most of them suggested that the collapse of the two towers (and a third structure, Building Seven, later in the day, which was not struck by a plane but did catch fire) was actually more in accord with professional controlled demolition jobs than fire damage.

These early articles gave rise to a luxurious undergrowth of books, articles, online documentaries and websites. This activity soon came together as the “9/11 Truth Movement” made up of experts in the fields of physics, architecture, demolition, medicine and finance, along with concerned citizens–especially the families of the people who were killed in the World Trade Center on September 11, both people working in and visiting the building and the New York police and fire-department responders. If you search “9/11 conspiracy theories” on Google today you will come up with some 6.590.000 results (0,57 seconds). If you are interested in seeing the counter-evidence regarding 9/11 this is a good place to start. 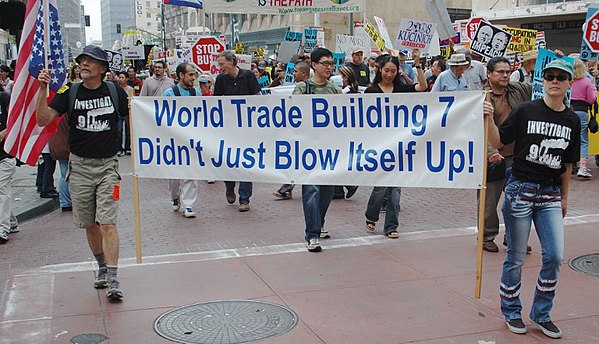 Most of the 9/11 Truthers agree that the World Trade Center buildings were victims of controlled demolitions and they offer solid scientific reasons for that belief. Needless to say, if the controlled-demolition thesis is correct, someone has a lot of explaining to do. The Bush administration commissioned a report from the National Institute of Standards and Technology (NIST) to address the technical issues at play on 9/11, the conclusions of which assured America that the events of September 11, 2001 could be explained by the ordinary application of physical, metallurgical and architectural principles. Not everyone was convinced.

A Humble Suggestion Before You Start Your Quest, Frodo

Never lose sight of the fact that some of your sources may be mistaken, lying or advancing a false agenda, a phenomenon which complicates matters. It requires you to consult a variety of sources and compare their different versions of events. You will soon begin to detect honest reporters and concerned experts, to discover facts, trends and patterns that will help you make your own informed opinion. Who had something to gain, to cover up, to promote? And, of course, follow the money, a rich vein in the 9/11 story.

This research used to be an arduous, time-consuming task, but Internet has simplified the critical first steps immensely. You can start your research on Google. There you will find results for all points of view. Take the time to read various versions with a critical eye. Internet conspiracy-theory research is more fruitful than looking in the mass media because the alternative to studying the issues yourself is to accept the standard version of the media or interested opinion leaders with their own biases, agendas and phobias. At worst you can find yourself buying sausage from a dodgy butcher.