I feel like Paul Revere this morning and I haven’t even had my coffee yet. It’s not that the British are coming. It’s way worse. The Nazis are coming. I mean they’re here. That is, there. In California. Home-grown American Nazis have been on the march for some time in California and other places across the country, infiltrating police departments, but I just discovered it yesterday morning in an article in The Guardian and I urgently need to alert the citizens.

Not only that, when I went back in the afternoon to take a closer look at the article published in a distinguished British newspaper it had been taken down. Is it possible that some sinister long arm–tentacle?–has reached across the Atlantic and pulled that story of less-than-admirable institutional connivance between American law enforcement and far-right undesirables?

The collusion between “legitimate” authority and Nazi thugs, sounds all too familiar to anyone who has read William L. Shirer’s, The Rise and Fall of the Third Reich. (If you haven’t read it you might start now. It’s an essential book for understanding the Second World War and everything that’s happened since.)  This collusion is entirely too grave to be ignored. It seems that the California Highway Patrol (CHP) and state prosecutors made common cause with the Traditionalist Workers Party (TWP), the extreme right-wing group that organized a neo-Nazi rally in Sacramento, California, along with their affiliate, the Golden State Skinheads, and the National Socialist Movement, another neo-Nazi organization.  Members of these groups were the principal protagonists of the violence that took place outside of Sacramento in June of 2016. This Nazi/police department collaboration allegedly began long before the day of the rally, continued during the event–with the Nazis stabbing and brutally clubbing the counter-demonstrators with the police standing by inert–and, now that the case is in court, the police and the Nazis are colluding to convict the victims of the violence that occurred on that day. At least 14 participants suffered stab wounds, cuts and bruises, with two surviving critical stabbings. Police also recovered a loaded gun.

Only one of the neo-Nazis involved in the events of that day is even accused. That accusation was undeniable as it was backed by a video that was shown in court. According to a January 26, 2018, USNews.com account of the trial of neo-Nazi activist, William Scott Planer, 35, accused of assault with a deadly weapon on the day of the rally:

The Sacramento case against Planer rests on a social media video played in court Friday that shows counter-protester Alice Summers attempting to rise to her feet from the Capitol lawn. Planer runs up behind her and hits her in the head with a pole, using a full baseball bat-like swing. She drops unconscious before three other counter-protesters drag her away.

“I do not see an issue of self-defense,” the judge said. “He comes up behind her and strikes her in the head.” 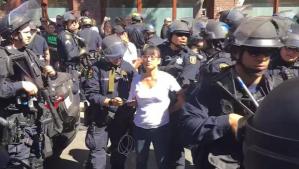 According to Yvette Felarca, a Berkeley teacher and anti-fascist organizer charged with assault and rioting after participating in the June 2016 Sacramento rally, she was stabbed and bludgeoned in the head. “It is shocking and really angering to see the level of collusion and the amount to which the police covered up for the Nazis,”  “The people who were victimized by the Nazis were then victimized by the police and the district attorneys.”

One officer’s write-up about an African American anti-fascist activist included a photo of him at the hospital after the rally and noted that he had been stabbed in the abdomen, chest and hand. The police, however, treated the protester as a suspect in the investigation. The police investigator recommended the man be charged with 11 offenses, including disturbing the peace, conspiracy, assault, unlawful assembly and wearing a mask to evade police.

“Turning a blind eye to right-wing violence isn’t new. Law enforcement’s inability to reckon with the far right is a problem that goes back generations in this country,” Janet Reitman wrote in The New York Times, referencing the Oklahoma City bombing that killed 168 people.

Why don’t the authorities infiltrate and eavesdrop upon the “alt-right” with as much vigor as they dedicate to disrupting peaceful left-leaning organizations like Occupy Wall Street and the anti-nuclear nuns? Why do cops spend more time monitoring political cartoonists than Klansmen and neo-Nazis? The answer is as obvious as it is terrifying. America’s state security apparatus, military and civilian police, alike, view the left as enemies. To the police, right-wingers are political allies.

frequently in rallies and counter-protests, where violence often breaks out, police are calling for help from only one side: the far-right, The Intercept reported. The relationship works both ways: Police get help, and alt-right demonstrators are seemingly put above the law in return.  Violent right-wing extremists don’t just work with the police. Often they are the police.

“Police officers tend to be conservatives, many of them ultra-conservatives. So there are people in law enforcement agencies that are sympathetic to these groups,” says Daryl Johnson, lead researcher on an Obama-era DHS report. Other studies have confirmed that police unions overwhelmingly endorsed Trump. As one might guess, the military has a right-wing inclination, as well. Veterans voted 61%-to-34% for Trump over Clinton.

A staff writer from ItsGoingDown.org says:

But what is most clear from the last year (for 1916) is not a ‘smoking gun’ connection between Trump and white nationalists, but instead the reality that police and prosecutors are coming down hard on anarchists, water protectors, black lives matter protesters, and antifascists, as they are giving a free pass to the Alt-Right. Ironically, as the Right portrays grassroots social movements as simply the ‘puppets’ of the Democratic Party and billionaire financiers like George Soros, it is the racist and anti-Semitic movements on the Right which are being used as shock troops for Trump’s elitist and corporate agenda.

Birds of a Feather

Eleanor Clift, writing in The Daily Beast in 2014 sheds some necessary light on why, despite the traditional Republican allergy to unions, the right-wing politicians/extreme-right-wing activists’ romance extends even to police unions.

The police are the domestic version of national defense,” says Sam Popkin, a political science professor at the University of California, San Diego. “The reason that Republicans love them so much,” he explained, “is that Republicans identify very strongly in a time of change and turbulence with the troops that provide order. The police are very popular with Republicans and with the middle class in general.

When Wisconsin Governor Scott Walker cracked down on collective bargaining rights of public-sector unions, he exempted cops and fire fighters. He feared the police might go on strike and join the protestors.

All of this information is quite straightforward. No surprises here. The question is, “What comes next?” Where does this cops-and-thugs coalition lead us? I said in a piece I wrote a couple of months ago about the possibility of a second Civil War in the US that the survival of American society as we knew it was dependent upon whose side the police and the military came down on when the excrement hit the ventilator. Now, given the information above, I don’t think there’s a lot of room for optimism.