Immigrant detention centers around the country 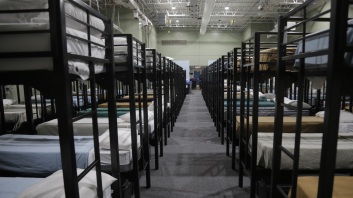 Dormitory beds for migrant children at the Homestead “temporary influx facility” outside of Miami.

What Can We Do About American Concentration Camps for Children?

I feel helpless. With the creation of prison camps for children including toddlers, the United States has taken us to a new low, a sordidness that humanity has seldom seen before. We have to do something, but what can we–you, I, and the rest of us–do? My usual resort is to sit down and denounce these abuses writing them up, which is about the best I can do from here, thousands of miles away from the action. I should be sitting on the White House lawn, dousing myself with gasoline and touching it off with a match. But I’m too cowardly for that. Besides, it would serve only to give President Trump something to snark at. So I’ll write it up.

My first pass through Google alerts me to lurid aspects of this phenomenon that I had not anticipated: sexual abuse, deaths, overcrowding, lack of hygiene and clean water– children being told to drink from the toilet–a secret Facebook group with some 10,000 Border Patrol agents where they have posted vulgar insults about immigrants and the lawmakers who visited them in Texas… According to FreedomforImmigrants.org, the children are also victims of “aggressive guards.” I wonder, where does one go to find aggressive guards for children? This detention and mistreatment of little people isn’t merely severe. It’s monstrous. My immediate reaction: What’s going on here, and why? The mind reels.

Before I left the States for good, 50 years ago, they had child abuse, racism, deplorable prison conditions, and irregular accountability, but nothing like today’s deliberately programmed cruelty to innocent children sanctioned by the country’s highest authorities. There has been an order-of-magnitude change in standards, attitudes and societal acceptance. This could not have happened, I submit, when the country was headed–and populated–by human beings.

So, what, exactly, is going on? In an excellent article in The New Yorker (July 10, 2019) staff writer Isaac Chotiner reflects on how detained children are treated around the world. Chotiner’s interviewee, Michael Garcia Bochenek, the senior counsel to the Children’s Rights Division of Human Rights Watch, is a first-hand witness of child detention practices around the world. He says:

But—just to name a few places where I’ve gone into detention centers—Angola, Liberia, Brazil, Mexico, and Guatemala have significant degrees of repression, or certainly have targeted people for speaking out. Including kids. But, in all of those places, there’s some recognition that kids should be held in a way that is consistent with furthering their development. European Union countries have very few kids in detention as compared to the United States. The US is kind of a standout in the world, in the worst sense possible, around detention.

So, take heart, the United States is number one… in child detention abuses. Though, they are striving to reach the higher levels of treatment and humanity of more advanced countries in child protection, countries like Angola, Liberia and Guatemala.

Is There Sexual Abuse, As Well?

The federal government received more than 4,500 complaints in four years about the sexual abuse of immigrant children who were being held at government-funded detention facilities, including an increase in complaints while the Trump administration’s policy of separating migrant families at the border was in place, the Justice Department revealed this week. The records, which involve children who had entered the country alone or had been separated from their parents, detailed allegations that adult staff members had harassed and assaulted children, including fondling and kissing minors, watching them as they showered, and raping them.

What happened to all those good Christians slithering around the Trump administration? Why aren’t they on the case?

Then There’s the Question of Profit

Virtually all of these children are being held in private, profit-making facilities, more of which are being built while you read this. Is it big business? According to federal government data, over 60 percent of immigrant detainees are held in privately-run immigrant prisons. (Source: Freedom for Immigrants.org) According to Worthrises.org, we’re talking, at last count, about 11,200 immigrant children in custody with the Office of Refugee Resettlement, for whom the government pays between $750 and $775 per day. Do the math. The market value of a child in the United States is not inconsiderable.

The American administration foresees the necessity of more detention facilities for children. Accommodations for an additional 1,400 unaccompanied minors have just been constructed–hard-walled units, not tents–within the grounds of Fort Sill, Oklahoma. Fort Sill is already notorious for having hosted detained Japanese Americans during World War II and has seen some demonstrations by that community recently. The decision to detain immigrants on military bases is significant as it means that it’s infinitely harder for human-rights organizations and the press to gain access.

The U.S. Department of Health and Human Services said Fort Sill will be used “as a temporary emergency influx shelter” to help ease the burden on the government as it prepares to house a record number of minors even though it already operates about 168 facilities and programs in 23 states.

Andrea Pitzer, Expert on the History of Concentration Camps

Andrea Pitzer, author of a new book, One Long Night: A Global History of Concentration Camps, examines the detentions of migrants in America in the context of the history of concentration camps in a GQ article of June 18, 2019. It is not a pretty picture. This is not the place to enumerate the improprieties she covers in her article, but this quote sums it up:

A camp in a country in which the leader openly expresses animosity toward those interned, in which a government detains people and harms them by separating children from their parents or deliberately putting them in danger, is much closer to a concentration camp than a refugee camp. Nothing we are doing is likely to repeat Auschwitz, or to come anywhere close to it. But the history of concentration camps shows us that when it comes to this kind of detention, even when a government isn’t plotting a genocide, shocking numbers of people can still end up hurt—or dead.

I wonder what makes her so certain that “Nothing we are doing is likely to repeat Auschwitz or to come anywhere close to it.”

Is the Whole Issue of the Detention of Immigrant Children a Manufactured Red Herring?

Yes, actually, it is.  Objectively, illegal and legal immigration are not very important issues, neither in numbers nor in terms of urgency, national security, nor any other relevant yardstick. The numbers of immigrants entering the United States today is the lowest in 40 years. The whole immigrant issue on the US southern border, including the children, far from representing a national emergency, seems to be a grotesque publicity stunt, like the border wall. It seems that the principal objective is to punish the people who have entered the country illegally–and some asylum seekers who are actually legal–and to warn others who might dare to try entering the United States. The Trump administration does not seem to be concerned about the flagrant human rights considerations that permeate the whole operation.

If the illegal immigration on the US southern border is just an artificial tempest in a giant teapot, what are the real issues that this illogical storm is camouflaging? We can only speculate. Is President preaching to his lurid choir with the 2020 elections on the horizon? Is he warning the legal immigrants already resident in the country to keep their heads down? Or do these cruel and unusual measures have to do with creating precedents–and primitive justifications–for steps that the Trump administration is considering taking against its own citizens in the future? Given the government’s trajectory until now, and the pressure-cooker atmosphere that is growing in the country, that possibility is not to be discarded.

What can you do to help?