If you look up definitions of “patriotism” you will find a collection of innocuous platitudes about love of country, shared values, pride, etc. It is as if the people who wrote those definitions were unaware that their loveable patriotism has metamorphosed from a cute little yellow worm to a giant venomous butterfly and that it has been instrumentalized as a tool used to justify all sorts of outrages all over the world. Those bland representations of patriotism have been largely out of date for centuries, perhaps as far back as the time when the ancient Greeks coined the word “patris,” meaning “fatherland,” in order to legitimize their own wars of conquest.

It’s patriotism in the hands of cynical politicians and dark interests that not only authorizes, but glorifies the United States’ least noble machinations both inside and outside their own country . It was a curious mousse of patriotism, anti-communism and business-as-usual that justified more than a century of American subversions, bombings, regime changes, invasions and occupations of other people’s countries around the world. It started in Massachusetts and Virginia in the 16th and 17th centuries against the native Americans and went from there to Mexico, Cuba, all of Central America and the Philippines, later to pass to Vietnam, Cambodia, Laos, Libia and Syria, among others. No country with strategic locations, sugar plantations or oil-and-gas deposits escapes American patriotism. “But that doesn’t make any sense,” you say, “no decent country can pretend to justify grave abuses worldwide on such flimsy, false thinking.”

How did such a pure and noble concept as the natural love of one’s country degenerate into murderous havoc? It didn’t happen haphazardly. It was carefully planted and nurtured throughout the history of American society, in their schools, churches, the media, the men’s clubs, the Boy Scouts, the military, the government, the think tanks, and Hollywood. John Wayne did more damage than napalm. Almost everybody was–and remains–on board. 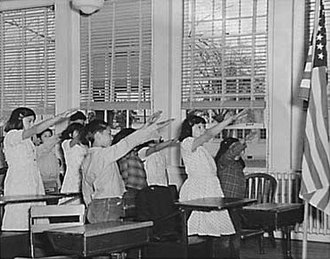 I wonder if American school-children still recite the Pledge of Allegiance to the Flag every morning. That would be considered insidious mind bending of innocent children in any advanced country except the United States. From 1892 until December 22, 1942, the Pledge was accompanied by the “Bellamy salute,” with the hand outstretched toward the flag, palm down. It was not until the middle of World War II, that Congress noticed the uncomfortable similarity to the Nazi salute and derrogated  the Bellamy salute in favor of the familiar hand-over-heart gesture.

The same goes for the American flag fetish, which I have written about earlier in this series. One of the first things that first-time visitors to the United States notice is the abundance of American flags adorning the facades of private homes. Seen from abroad, this looks like just another of the standard trappings of right-wing authoritarian regimes. And, in the eyes of the world, it is not a pretty sight.

We Can Often See the Beginning but not the End

Patriotism is one of humanity’s great concepts. It hits many buttons: idealism, emotion, empathy, inspiration, to name a few. But like virtually all of the other great concepts–think Christianity, democracy, socialism–it has been perverted, twisted over the centuries by shrewd, self-serving opportunists to hoodwink the populace and advance their own dubious and dangerous agendas. First they convert patriotism into a lie. Then they use that lie to justify their injustices.

The Americans have elevated lying to high art. Since the conception of advanced persuasion techniques in the 1920s by professional communicators like the Austrian-American pioneer in the field of public relations and propaganda, Edward Bernays (1891-1995). Bernays, who was Sigmund Freud’s nephew, was a pioneer in using communication both for business and political purposes. It was he who coined the term “psychological warfare” while working for the CIA on the overthrow of the democratically-elected Arbenz government in Guatemala in 1954. Bernays, a fascinating-if-sinister character is one of the principal figures in The Century of the Self, an award-winning four-part documentary produced for the BBC by Adam Curtis in 2002. It’s worth a look-in.

Do you remember the Boy Scouts, where we had such great times as kids? Remember their salutes and handshakes, their uniforms and their survival skills, their patriotism, and their inevitable links to magical religion? Our troop meetings were held in the basement of the Methodist church.  In short, the Boy Scouts were–and are–a lightly-camouflaged paramilitary organization.

Patriotism Has Always Loomed Large in the Repertoire of Authoritarian Regimes

That’s because it’s a cheap and effective resource for promoting their sick agendas.It’s a great recourse because it cannot be combated by reasoning. It’s like old-time religion in that respect. Its effectiveness is based entirely on emotion which, unlike facts, can be easily manipulated but not so easily refuted. And a skilfull, oft-repeated call to patriotism can be powerful beyond belief. It can lure young men and women off to unjust and inhuman wars with their statistical possibilities of returning diminished or dead. And, when they are brought back home in black plastic body bags, patriotism can convince their mothers that theirs was a worthwhile sacrifice. She loses a child, with all that implies, and in return receives a “beautiful funeral,” and a ceremoniously-folded American flag.

Congressman William McHenry has another point of view:

“Patriotism inspires us. It unites us. It fills our hearts with pride and optimism. And sometimes it brings us to tears. Simple but poignant acts of American patriotism occur every day. They rarely attract headlines but these are the actions that strengthen this great nation – and teach us the true meaning of patriotism.

The families of American troops make great sacrifices for this nation.  Believing in the cause for which their loved ones fight, military families bear great burdens and ask little in return.  As we pray for our troops, we must not forget the hardships of their families and pray that God watches over them as well.”

How neatly America’s seemingly innocent patriotism lends itself to military applications. It can be converted, virtually overnight if deemed necessary, into aggressive nationalism. From there to blood lust is but a short step. Anyone who has been through basic training in any branch of the military, or seen Stanley Kubrick’s Full Metal Jacket, knows this.

Some Americans can see through the sham, especially military veterans who have lived it in person, but unfortunately there are not enough of them. The old scam continues to bilk both young and old, year after year, war after war… What we’re looking at here is obviously brainwashing, but it’s not easy to convince Americans of that. Having drunk the Kool-Aid along with their mothers’ milk, they’re too thoroughly indoctrinated to believe anything else..

The 1918 Sedition Act, enacted during World War I, made it a crime to “willfully utter, print, write, or publish any disloyal, profane, scurrilous, or abusive language about the form of the Government of the United States” or to “willfully urge, incite, or advocate any curtailment of the production” of the things “necessary or essential to the prosecution of the war.” (Source: thirteen.org) More than 700 people were convicted under this scurrilous legislation and its validity was upheld by the courts. It is still applied today, notably in whistleblower cases. Since 2001 they have a newer law. It’s designed along the same lines but washes whiter.  Officially its objective is, “Uniting and Strengthening America by Providing Appropriate Tools Required to Intercept and Obstruct Terrorism.” That mission statement leaves a lot of room for maneuver–some would say too much–to all American law enforcement and intelligence agencies. It’s aptly called the “Patriot Act.” 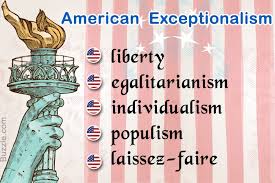 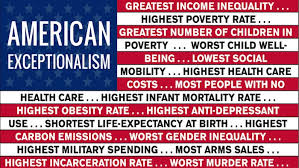 American Exceptionalism has several faces, all stemming from the fact that the history of the United States is inherently different from those of other nations due to its being blessed with liberty, egalitarianism, individualism, republicanism, democracy and laissez-faire. Therefore, Americans have a duty to ensure Lincoln’s dream that “government of the people, by the people, for the people, shall not perish from the earth.” All of this goodness obliges the United States to assume the mantle of superiority over all other nations. You couldn’t make this up, but  there it is, one of today’s rock-solid tenets of American ideology. Among other benefits this simple platitude insures that the United States enjoys immunity from international law. This whole system of patriotic values in an empty box has gotten them into some trouble and will get them into some more.

Historian Sheldon Stern, who served as the historian at the John F. Kennedy Library in Boston from 1977 to 1999, had this to say recently:

The idea of “American exceptionalism” has, in fact, become a political hot potato—reflexively embraced on the right and passionately denounced on the left. Perhaps we can gain some valuable insight into the historical merits of this concept by turning to one of the most underappreciated, but arguably the most brilliant of the Revolutionary generation, John Adams.

Adams was confident that the new United States was on the cusp of a brilliant future. But he did not believe that Americans, as a people, were exempt from the flaws and faults of other nations and peoples. “There is no special Providence for Americans … and their nature is the same with that of others. …We are not a chosen people … and we must and we shall go the way of all earth.” Americans, he warned, were not immune to the hubris, greed, and foolishness of the rest of mankind. He was convinced that negative rather than benign forces had largely shaped—and would continue to shape—human political behavior; and Americans were no exception. (Source: HistoryNewsNetwork.org)

The Future of American Patriotism

Regarded from a discreet distance with a cold eye, old-fashioned American-style patriotism doesn’t seem to have a brilliant future. Its practitioners, victims of lifetime chauvinistic training, are either in plastic garden bags or Congress, are washed-up  presidential advisors to alcoholic presidents or undereducated industrial and agricultural residue, demented billionaires hell bent on buying the world, or elderly white men with dual doctorates in cynicism and opportunism. Patriotism has taken their country into permanent war and a domestic dead end. Despite their military’s highly-touted “full spectrum dominance,” the last wars they won were against Panama and the tiny Caribbean island of Grenada, and their fifth-generation allegedly-invisible “stealth fighters” can be detected by the antique radars that spotted Hitler’s luftwaffe headed across the English Channel towards London. What is the solution? “Hopes and prayers” probably won’t get the job done. It looks as if the Yanks won’t be waving their aircraft carriers for much longer unless some bright young American comes along with magical powers. Do you believe in magic?

Thanks for following, sharing and commenting.