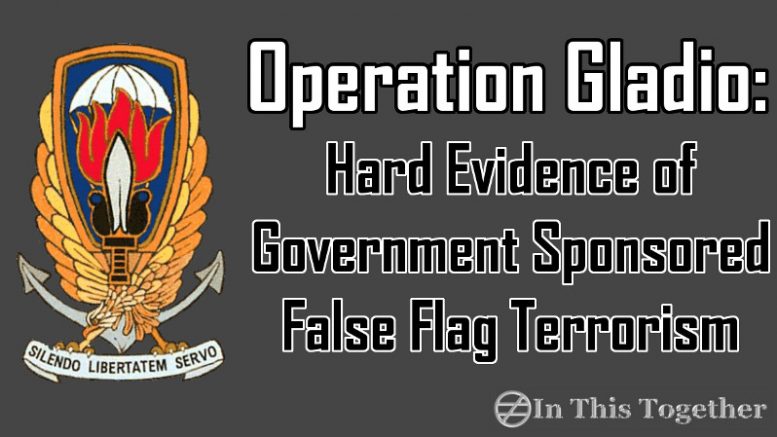 This damning timeline offers a lot of food for thought and leads for further research. The author of NATO’s Secret Armies, Daniele Ganser, is currently a Senior Researcher at the Center for Security Studies (CSS) at the Federal Institute of Technology (ETH) in Zurich, Switzerland. We can be sure that he and his colleagues continue to think.

The stay-behind/Cladio program was a big success. Its deadly false-flag operations were routinely attributed to left-wing activists who were prosecuted, imprisoned and assassinated en masse for decades.

Perhaps the most shocking aspect of this years-long operation was the senseless taking of random innocent lives for the hollow cause of anti-communism.

The scale and extension of Operation Gladio was Europe wide and was responsible for massive twists and turns of policy in many European countries. Among the most dramatically affected were Italy, Greece, Belgium and Turkey. The tragic history of Greece since  World War II is largely attributable to British and American betrayal of the Greek resistance forces who had successfully driven the German army out of their country. That victory was reversed when the Alllies, fearing communist influence in the upcoming Greek government, retired their support. This counterfeit anti-communism in Greece led, in the sixties, to the brutal dictatorship of the Greek colonels.

Gladio helped to assure right-wing, anti-communist governments would rule Europe for decades, thus negating European countries the direction of their own democracies, their own sovereignty and the course of history.

Gladio was the test bench for subsequent CIA terrorist operations in the rest of the world. It showed what control was possible with a well-run anti-communist false-flag terrorist organization in place.

Gladio permitted the Americans to pitch themselves as paladins of democracy around the world, when the truth was precisely the opposite. In this connection, recent American presidents have done the world a favor by pulling back the curtain of American government methods and motives, from criminal drone assassinations to regime-change operations. Perhaps the greatest irony today is President Trump insisting that NATO is there to “protect” Europe and demanding that they pay for that protection. It’s almost as if he had taken lessons from the Mafia.

Gladio reinforced the US self-image of altruism, exceptionalism and defense of “Western values.” Most Americans today still see their country as the beacon on the hill.

Gladio helped the US to cast the Russians as ruthless aggressors and war mongerers, a plague on the earth, while at the same time constructing an iron ring of military bases surrounding Russia. The Americans retain to this day between 800 and 1,000 bases worldwide while their gargantuan–and ever rising–“defense” budget relegates a large part of their own citizens to crushing, irreversible poverty.

What exactly are the Russians guilty of? Principally, they had the misfortune during the first third of the 20th century, to build a better mousetrap, a model for an egalitarian  society that posed a threat to American laissez-faire capitalism–until the ideals of the Russian revolution were sabotaged by Stalin in the 30s.

Now that the terrible Gladio story has been exposed time and again, we should be able to forget those lamentable times and move on. Well, not quite. Serious research and reliable witnesses have linked recent terrorist events to the offspring of Gladio. They affirm, for example, that Gladio units reappeared in Norway in 2011 with the Anders Breivik slaying of 77 peopleon the island of Utoya. They are also convinced that sons of Gladio have become active across Europe under anti-Islamic and ultra-nationalist banners.

One of the leading proponents of the existence of a Gladio B, is whistleblower, Sibel Edmonds, the ex-FBI contract interpreter/translator who was fired from the FBI for her inconvenient truth telling. In the process she won national whistleblower awards for revealing serious irregularities with wide-ranging implications in the bureau’s translation department. She went on to participate in founding a news agency (Newsbud) and to write an autobiography: Classified Woman – The Sibel Edmonds Story: A Memoir. Edmonds goes so far as to implicate Gladio B in the 9/11 attacks on the World Trade Center.

When the CIA feels they’re onto a good thing–And why wouldn’t they feel that way about Gladio?–it’s not easy to convince them to change course. We may be plagued by CIA/NATO terrorism for years to come. The current COVID-19 crisis makes attempts at prediction absurd, of course, but time will tell. One thing is certain. It would take tectonic political changes in the United States to halt–or even slow–their strategy of world domination.

Thanks for conmmenting and sharing.

One thought on “US Sponsored Terrorism in Western Europe 3/3”