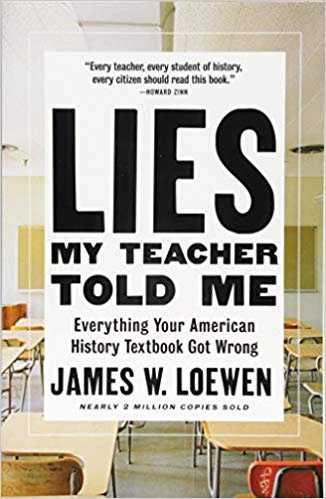 In 1995 American sociologist James W. Loewen published Lies My Teacher Told Me, an essential book that illuminates the indoctrination that passes for education in American high school history classes. The book was so important that updated versions have been published twice since then.

Loewen’s methodology was simple enough: buy a dozen of the most popular textbooks of American history for 11th-grade high-school students, meticulously analyse each one of the books, compare them, evaluate them, and place them on the history-mythology continuum.

The results of this analysis reveal that mythology wins. The first priority of all these seminal books in the formation of young American minds is to foment “traditional American values,” not to teach the unvarnished facts of history.

Goodreads.com has this to say:

Marred by an embarrassing combination of blind patriotism, mindless optimism, sheer misinformation, and outright lies, these books omit almost all the ambiguity, passion, conflict, and drama from our past.

Racism, for example, is not mentioned in any of them. Slavery, in particular, was the driving force behind major events like the Louisiana Purchase and the Civil War. Loewen points out that, “as long as history textbooks make white racism invisible, neither they nor their students who use them will be able to analyze race relations intelligently.”

No Warts on America

Why do textbooks promote wartless stereotypes?” asks Loewen. “The authors’ omissions and errors can hardly be accidental.” He then chooses two paradigmatic figures from American history to illustrate his point: President  Woodrow Wilson, the 28th US commander in chief, and the remarkable blind and deaf humanitarian, Helen Keller. Wilson is known, and enters into high-school history books, as the altruistic promotor of the post World War I League of Nations and for his 14-points declaration which included  proposals to ensure world peace in the future, open agreements, arms reductions, freedom of the seas, free trade, and self-determination for oppressed minorities. Wilson even suggested that there would be another world war within a generation should the U.S. fail to join the League. Woodrow was quite the statesman and diplomat.

What few US high school history books mention is that Wilson was authoritarian and racist at home, having promoted the Espionage Act of 1917 and the Sedition act of 1918, which Loewen refers to as “probably the most serious attacks on the civil liberties of Americans since the short-lived Alien and Sedition Acts of 1798.” Wilson, with his persecution of progressive causes–he promoted the notorious Palmer Raids against left-wing unions–and foreign interventions, paved the way for McCarthyism, the Patriot Acts,  and the disastrous invasions of Iraq. Under Wilson the US intervened in Latin America more often than at any other time in American history. Loewen cites an article published in the Saturday Evening Post in 1919, “After World War I, the Wilson administration’s attacks on civil liberties increased, now with anti-communism as the excuse. Neither before nor since these campaigns has the United States come closer to being a police state.” That was in 1919. Much “progress” has been made in the advancement of the American police state since then and we’re seeing the results of that progress on American streets today.

Helen Keller Was Much More

Helen Keller, Loewen’s other example, is portrayed in the history books as an admirable case of individual victory against tremendous odds, an American success story. Her activities recorded for American high-school students are limited to her remarkable educational achievements and her charitable work. But Keller’s life was much more remarkable than that. Loewen recounts:

She was a radical socialist. She joined the Socialist Party of Massachusetts in 1909. She had become a social radical even before she graduated from Radcliffe and not, she emphasized, because of any teachings available there. After the Russian Revolution she sang the praises of the new communist nation. ‘In the East a new star is risen!’ Gradually she moved to the left of the Socialist party and became a Wobbly, a member of the Industrial Workers of the World (IWW), the syndicalist union persecuted by Woodrow Wilson.

Inexplicably, none of this information made it into any history texts for American students.

The Shining City on the Hill,Champions of Self Deception

“The land of the free and the home of the brave…” begins to sound a little shopworn after watching children, forcefully separated from their families, imprisoned in wire cages on the evening news. As for “bravery,” that’s hard to detect in killer operations conceived in the White House, launched from underground bunkers in the Nevada desert by expert computer gamers and destined to take out terrorists, along with their mothers and children, their cousins, neighbors and the milk man on dusty streets of impoverished Middle Eastern countries. Emma Lazarus’ poetic fragment from the Statue of Liberty, “Give me your tired, your poor, your huddled masses yearning to breathe free…” sounds like empty claptrap in a country that is more concerned with “free” markets than free people. But those distinctions elude most Americans today. To them “fraydom is fraydom,” whether delivered by lies or by drones.

The United States Armed Forces are there to safeguard those fraydoms. But there are some anomalies in that, too. Recently there was some talk inside the Trump administration of renting out American military units to the Saudis. Seen from a shrewd businessman’s point of view the deal would permit the US to recover some of their investments in “national security,” but they might have trouble explaining it to the mothers of American military personnel killed and maimed over there. In former times those deaths could be explained away as “in defense of American democracy” or “protecting the American homeland” but what American mother would sell her son’s or daughter’s life in defense of Saudi oil wells, war on Yemen, and bone saws?

One thought on “Teaching Your Children Solid Lies –1/2”