A Book in Bed, Ahhh…

“Let’s have a lie-in tomorrow morning. It’s Sunday,” says Maureen. But I’m an incorrigible early riser so yesterday morning I was up at 5:30, lighting a fire in the bedroom fireplace and looking for a book. The first one to come to hand was Richard Hugo’s Selected Poems. I read it quite a few years ago but I was ready to give it another go. Books don’t change, but we do. The best example of that phenomenon that I can recall is my experience with Arthur Miller’s 1952 play, The Crucible, set in the 17th-century Salem witch trials, but universal in scope. The Crucible was required reading when I was in college but it  made no impression on me. Then, when I was 30, I had to spend a month in bed with hepatitis. Toward the end of that time The Crucible was the only book left in the house that I hadn’t read. I was poleaxed by it. It’s one of the most intelligent and moving books, theater or otherwise, that I have ever read and my discovery that it was a commentary on McCarthyism only enhanced its value. It contains this line, for me, and in context, one of the most moving in literature:

Elizabeth, gently: “They press him, John.”

Richard Hugo, the Personification of Bleakness

Maureen became friends with Richard Hugo in the mid-sixties when she was running a little hotel and restaurant in Nerja, a fishing village on the Mediterranean coast of Málaga province. The town was bucolic then and an eight-liter carafe of passable red wine cost less than a dollar. Barefoot children ruled the cobblestone streets. The village was ideally placed between the coastal mountains and the sea, with kilometers of beaches and 300 days of sunshine a year. Since then it has been devoured by industrial tourism. So it goes.

The poet was in his early 40’s during his three-month stay in Nerja. It was time enough for him to fall in love with a much-younger English girl. He bought her a ring. Her parents obliged her to return it. That was a typical Hugo ending. He was already a well-known American poet at the time and later went on to edit the Yale Younger Poets series, to have two of his books nominated for the National Book awards and to direct the creative writing program at the University of Montana. 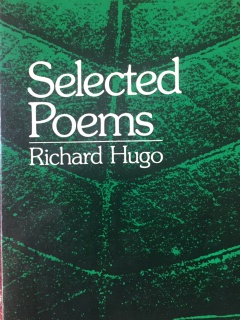 A good poet can rearrange your chromosomes and Hugo is undeniably a good poet. But he’s a poet of constant sadness and unfulfilled lives. According to Maureen’s account Hugo fought in the Italian campaign during the Second World War. Several times while she was waiting to close the bar he recounted for her his grueling experiences in the 123-day siege of Monte Cassino where the Allies lost 55,000 troops. “He never looked up from his beer while he was telling the story,” she said. Could the origins of Hugo’s world view include a case of PTSD? Who knows. In any case, there’s very little glamorous Big Sky Country in his writings. What he perceives in Montana are its numbing cold and damp, its mining-town poverty and an irretrievable love affair. And he notes that there were people in Butte named “Grubski.”

Though Hugo grew up in Seattle and studied at the University of Washington he is more associated with Montana, perhaps the place he should have been born due to its unforgiving bleakness. You can’t grow many cash crops up there, but Hugo makes it look like a perfect place to cultivate despair.

Saved by the Contacts

I was on the verge of despair myself when a 4×6-inch sheet of glossy paper fell out of Hugo’s book. It was a sheet of what we used to call “contact proofs.” These were digital copies of black and white negatives and quite a bit smaller than standard 35mm contacts. So they were harder to read and for that perhaps more intriguing. So I got out the great magnifying glass that came with my condensed versión of the Oxford English Dictionary, 16 volumes shrunken down to two, still hard to read, even with that  magnifying glass. Judging from the age of our dog, Pachi, in the pictures they must have been taken in the mid-80’s, about 35 years ago. It was a different world then and we and our friends, though still the same people, were younger. In the meantime everything has changed. The Spanish have a phrase for this: “Ha llovido.” “It has rained.”

The first three frames at the top left are images of the Gentle Young Poet (GYP), sitting at the base of the fig tree with Pachi lying placidly in the background. GYP had already won a national poetry prize by then and would go on to write many more books of poetry and to teach literatura at university level. One of his first collections of poems was entirely about his girlfriend’s anatomy, which he considered unique, as all young men do. Today he’s the director of one of Spain’s principal international cultural projects.

Next on this glossy little sheet of nostalgia come a few shots of my best friend (MBF) and his wife in bed with their newborn baby girl. She’s precious in the pictures, as all babies are, but as she grew up she began to show symptoms of instability such as screaming her way around the house, “Leave me alone!” Today she’s a perfectly normal Canadian engineer, married and with a family of her own. You never know.

I first met MBF when he was 17. Someone told me there was an American teenager living in Málaga who was writing articles for an English-language magazine there. I went down to do a story on him for a General Motors magazine called American Youth. He was a delightful, precocious kid and we hit it off immediately. Written on the front of his guitar was a quote from a Spanish poet (Antonio Machado?). It said (my translation):  “Don’t identify yourself with the ‘you’ of my song, friend. That ‘you’ is me.”’American Youth paid $500 for the story, a small fortune in those days.

How Can I Be a Godfather?

When their second child, a boy, was born MBF asked me to be the godfather. I replied, “How can I be a godfather? I’m an atheist.” “That’s why we want you to be the godfather,” he said. So Maureen and I drove the 130 kilometers down to the ceremony on a 250cc Ducati 24 Hours. It was a great little bike but it was also the month of February and the thing I remember best from the whole experience of that day was stopping at the side of the road every 20 or 30 kilometers and flapping our arms to restore our circulation. MBF was a saint of a father and a friend. He died of lung cáncer at the age of 45. A lot of people miss him. Many of them will tell you he was their best friend.

The next three frames are photos of the Young Painter Who Wanted to Be Famous (YPWWTBF). He was the youngest of a talented and idealistic group of people, most of whom belonged to the Cultural Cell of the Granada Communist Party. A lot of them were well on their way to fame, GYP among them, as writers or musicians and he, not a bad painter, half expected to be joining them soon. It never really happened but his consolation prize is a lot of famous friends, all of whom esteem him.

Then come eight frames of our Great Dane, Pachi, the best dog we ever had. Why does he have more pictures than anybody else? Because he deserves them. He was big and beautiful, noble and as gentle as a lamb—except for one occasion when a rough English couple came down our entrance stairs shouting demands. Pachi accompanied Maureen out to see what the ruckus was, his right shoulder pressed against her left leg. The ingleses never made it to the bottom of the stairs because Pachi emitted a deep-throated growl that inspired them to turn around and scramble up the way they came. We never saw them again.

Then three frames of Granada’s most talented poet since Federico García Lorca. Unfortunately he, the son of a prominent Granada doctor, drank and led a disorderly life and committed suicide at 35. Maureen had painted a near-life-size double portrait of him and his girlfriend at the time and given it to him as a gift. It was one of her best. One of his subsequent girlfriends—he had a few—shredded it with a knife in a fit of jealousy.

Next  comes a single headshot of Maureen, wearing her painter’s squint, and then three shots of the suicidal poet’s former girlfriend, the subject of the ill-fated portrait. She wasn’t beautiful in a conventional way but she had a head of pitch-black hair like a stork’s nest, and beautiful breasts. She was nude in the double portrait. Perhaps that’s what motivated Girlfriend Two’s destructive rage.

The next three frames are identical bracketed (one on, one over, one under) photos of the bronze monument to Mariana Pineda—Granada’s Betsy Ross—in the plaza named after her in a quiet corner of the city. Bracketing is what photographers do when the light is tricky or when they’re insecure or just too lazy to expose carefully.

The last three photos are of the Petite Bavarian Painter (PBP) sitting in the extravagant wicker chair that figures in the aforementioned portrait, looking like a miniature Polynesian princess. The PBP has lived in Granada for some years now, running a bed and breakfast in the Sacromonte Gypsy caves, and is one of our favorite people. Before that she lived in a Bavarian town south of Munich surrounded by delightful gasthauses in the countryside where they served sausages with wonderful potatoes simmered ever-so-slowly in farmhouse-fresh butter. At one of them we could see deer bounding around the meadow below. And of course there was the beer, brewed according to the 1516 Reinheitsgebot rules, which permit only three ingredients: water, hops and malt.

We used to visit PBP and her Japanese mate almost annually during the 70’s and 80’s. PBP’s cooking—always the finest ingredients—was so good and occasionally her husband would prepare a Japanese meal. One time we stayed with them for two weeks. When they arrived in Granada to stay Maureen taught her etching.  Those were the years when I covered most of Europe and North Africa for an American hotel guide. People always ask if that was an interesting job. Yes and no. The first time you see Belgrade and Skopje they’re interesting, but by the fifth visit you start to get the feeling that you’ve been there before. Yugoslavia had its charms, though. There were no advertising signs along the road, and people were so refreshingly naive. I asked the manager of a lovely little 40-room hotel on a lake if it was private or publicly owned. He looked at me pityingly and replied, “Public, of course. Nobody has enough money to own a hotel like this.” Also, I loved Ćevapčići and Yugoslave speeding tickets which, in those days, were like a dollar and a half. The war in Bosnia-Herzogovina changed everything there for me. Sarajevo used to be one of my favorite places. But I can never go back.