One lie rules all the others. It’s the lie of American exceptionalism. American children are nursed on it along with their mothers’ milk. It comes in various guises but they all have to do with the “fact” that Americans are different from the rest of humanity: somehow better, more idealistic, more generous, more industrious,  more advanced, more democratic, cleaner, more godly. And these qualities, of course, entitle Americans to certain inalienable privileges.

Soldiers are trained to kill for their country. The unsuspecting recruits usually don’t discover that it’s a scam until it’s too late. 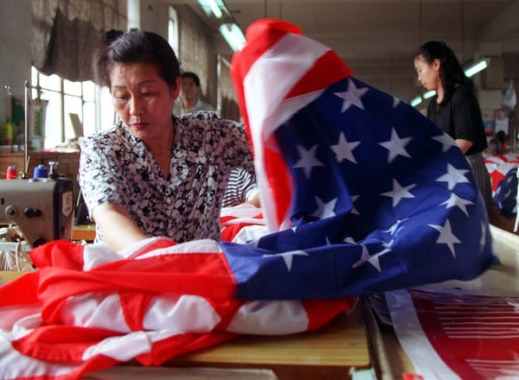 Patriotism as big business thrives on the lies that teachers tell American schoolchildren. Americans purchase some 150 million US flags every year, 10-20 million of which are imported from China (and are not subject to President Trumps import tariffs). No other country in the world reveres its flag as the US does. The caskets of their soldiers returning from foreign wars are wrapped in it, making the package look more like a Christmas present than a dead boy. People from other countries consider it an American fetish. It does, however, advance the American ultra-nationalist agenda. Flag enthusiasm is the abracadabra that permits them to justify the unjustifiable on countless occasions and in countless contexts.

American patriotism has also been reduced to selling cars and credit cards. The Brandkeys.com site lists America’s most-patriotic brands. A national sample of 5,862 consumers, 18 to 68 years of age, balanced for gender and political party affiliation, drawn from the nine U.S. Census Regions, evaluated brand resonance for “patriotism.” Here are the top 10:

According to Statista.com 72% of Americans are “Extremely” or “Very” Proud to be American

The Kardashianization of America could turn out to be a prime cause of the country’s ongoing decline.

It’s not just textbooks that keep the beloved American myths alive. Lots of other factors help to condition the intellectual atmosphere under the American bell jar.

The Military–With all its heroism, terrorism, expensive toys and glorious history of victories declared, the military is the lie personified. Soldiers are educated by semi-literate drill sergeants to kill “for their country” to defend the Constitution. The unsuspecting recruits usually don’t discover it’s a scam until it’s too late. The price they pay is exhorbitant.

The Scouts–The Scouting movement, with its uniforms, marching, saluting, survival skills, and patriotic cant, has been since its inception in 1910 a para-military organization, virtually a children’s army that has had a massive influence on American boys. Until recently it was statutorially bound to churches, another quintessential Americanizing factor for young people to get their heads around. Things are about to changing radically, however, as the scouts and the church are now legally separated and, as this NY Times headline from Feb. 18, 2020 points out: Boy Scouts Seek Bankruptcy to Survive a Deluge of Sex-Abuse Claims. Pederasty has a long history in scouting, starting with its founder, British Lt. General Baden Powell, who revealed his “affection for boys” in his diaries. It’s possible that today’s mix of scandal and economic disaster will mean the end of scouting.

The Media–Television, Hollywood movies, right-wing radio, and the mainstream press don’t require much government control to put out the “correct” ideological messages. Virtually all of these media are owned by conglomerates that benefit from the promotion of tendentious American mythology.  Nine-eleven, of course, opened the floodgates for jingoist content of all sorts.

Who is acknowledged by the American people as the most patriotic American of our time, in answer to the question: “Name anyone – alive or dead – you feel best personifies the value of “patriotism” in the United States'” Originally posted on Brandkeys, as part of a study of consumer values in America, the answer to this question is not hard to guess.  John Wayne’s character and unwavering patriotism still stand the test of time, as consumers answered, unaided, that John Wayne is the most patriotic person in 21st-century America, quite a feat as he died from lung cancer in 1979.

Pop Culture and Consumerism–The roles of pop culture and consumerism in the nurturing of American lies is indirect but essential. Both of these all-encompassing phenomena occupy and infantilize the nation’s thinking and lifestyle so thoroughly that there remains little room in the collective mind for anything else. The Kardashianization of America could turn out to be a prime cause of the country’s ongoing decline.

The Trouble with Lies Is That They Come Unraveled with Time

The American exceptionalist lies, which were never taken seriously abroad, started to be doubted even by some enlightened Americans themselves in the light of their government’s gratuitously savage foreign wars and economic imperialism. That tide began to turn with the anti-Vietnam-war demonstrations organized by “radical” American students in the sixties. Bearing banners and yelling slogans on the streets of American cities was considered “radical” while indiscriminate mass murder by grid bombing carried out by American B-52 Stratofortress bombers was mere business as usual. Not much has changed in the intervening half century, considering right-wing America’s truculent response to today’s Black Lives Matter marches, which President Donald Trump, the law-and-order candidate, is astutely using as a creepy springboard for his 2020 presidential campaign.

Isn’t It Time to Heal America?

It shouldn’t be too hard to heal America. All they would have to do is face the facts–not the myths–honestly, renounce the lies publicly, repent openly, repeal the noxious textbooks, correct the mendacious institutions and take significant measures to address inequality. Working hard with broad cooperation, dedication, and perseverance that healing shouldn’t take more than three generations. The Germans and the Japanese achieved it in two.